Three Kates in a trenchcoat.

I can't find the passage in a hurry (nor should I; it's best applied to particular contexts) but I think I read this in a Damien Echols book: the first thing race car drivers are taught is not to look at the walls, because if they do, they’ll hit them. I call this to mind any time I’m feeling destabilized by the speed of change in my life; do not look at the obstacles, Kate. Keep your focus on where you’re going, or you’ll hit a wall and flip.

Right now, now, it is one of those times.

At times of frustration or stagnation (much more comfortable to me) I have often thought: what would another person, one with a clearer focus on life, do with this brain, this life, & this body?

There’s another Kate Zarvis, a bad ass in her own right. She’s younger than me, owns a nail salon in Pennsylvania, and is a BODY BUILDER. This is not a metaphor - she’s a real person. Like an alternate universe Kate Z. Solid as a rock. Extremely driven. A little alien to me. Could bench press you. But wouldn't?

There was a storm called Kate in August, which the National Hurricane Center categorized as a “tropical depression.” Hot and anxious, maybe, but unsure how to act. In need of a catalyst? Angry and misdirected. Stewing. The second Kate.

In September, Netflix released the movie KATE about an assassin who, just as she’s decided to retire & settle down with a nice guy or picket fence or something, has those hopes dashed immediately by some fast acting poison and has about 24 hours to find out who did it and kill that motherfucker– 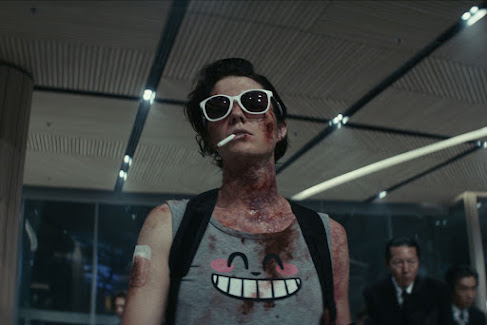 So, if someone stronger were steering, what then?

I am that person now. I am incredibly happy with who I am. I won't stop for discomfort. I'm done wasting time. And I am driving. Fast.

Where am I going though? I don't fucking know. I don't know.

All I can tell you is I better be careful what I look at.