Hello boys and girls. Primarily girls. Women. Today I'm going to introduce a little concept called "block everybody." Take notes. This is a self defense class.
First I have to explain a concept I like to call “removing the misogyny pin.” Imagine some men are like hand grenades. (no, not all men. But it doesn’t matter, unless you become especially adept at determining which ones, which actually trust me, will probably happen as you face abuse, which will happen to you because you’re a woman and you’re online.) These men will act like they like and respect women and consider us equals – you will know who they are because they will TELL YOU SO – and they will act like this for an indefinite amount of time, until you say the wrong thing.   (There is no wrong thing, by the way. There is nothing you should fear saying to a man. I should have put “the wrong thing” in quotes, but I didn’t want to trivialize it.)  The wrong thing will pull the pin out of the grenade.

Sometimes a different woman will come along after the explosion and kowtow, capitulate, sublimate their own needs, nurture, apologize, or exhibit any number of appropriately feminine behaviors and the guy will stuff the pin back in and say something like “see? it’s because you’re a bitch” to you, then be nice again to the non-aggressive woman.

I want to make it clear that I am not suggesting it takes an act of aggression to remove the pin. It does not. All it takes is an act of refusing to be less than. This is how you should always be. Say as much. Take up as much space. Be as heard. Land your words with as much finality. Be as competent.  When I say there can be, by contrast, a non-aggressive woman, I mean a less assertive woman. (Less assertive than the hand grenade, not less assertive than you. But, also, you.) This woman hasn’t exactly done anything wrong either, and has been used as a pawn.

But anyway, sometimes it's just you. And even without a "less aggressive woman" (peacemaker, likely) to contrast you to, who you are and what you've said and done are being distorted. You're being gaslighted. What do you do? Logic your way out? Defend what you said? Get smaller? Put on some armor and ignore it? Dive under a desk? Hell no. Vanish this cat. And then keep on keeping on. Get him out of your way, and continue to be you. Ready to see it in action?

Let me give you an example. 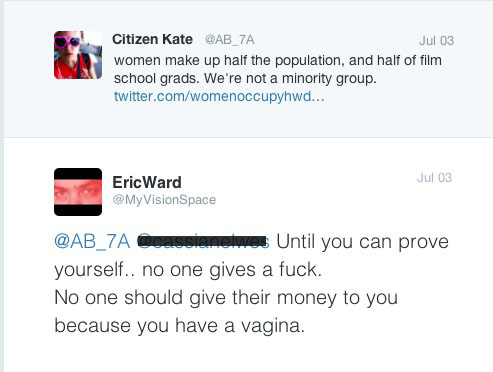 So how do you think I responded to this guy?  I had something to say, of course, because I don’t just sit there and take it up the rear when I’m talking about women taking it up the rear all the time for no reason.  But no matter .. here’s what I did that mattered.  Take notes.

I blocked the sonofabitch.

When a dude tries to shut you up, shut the motherfucker up.  It'll get easier. Practice.  One day you will visit your blocked list, out of curiosity, and it will be full of dudes.  They are not casualties. Who cares? No guy you want to be friends with will end up on this list. Just the guys who hate women and trolled you online. They sucker punched you, and you handcuffed them.  Don’t pass go, Don’t get the dude’s statement, don’t try to figure out where he’s coming from.  Don't check with anyone to see if you said something that - no. Just make it stop, stat. Nobody is going to do it for you.  It will learn to feel nice. No stress, no shot of sick adrenaline, no feeling like you’ve been insulted, demeaned, abused, just “block.” Done. It will become muscle memory. It will be so easy.

Block those motherfuckers. Block everybody.