In honor of the 40th anniversary of the Rocky Horror Picture show, I present (pieced together with the help of a friend, and a friend of a friend) the Minneapolis Uptown Theater transvestite soup audience monologue circa 1992*

I discovered, while trying to find an apt transvestite soup still to add to this post, something much better: this, the logo for the Twin Cities RHPC shadow cast which now calls itself Transvestite Soup! I had no idea ...

For those of you who have never been to Minneapolis and have no idea what this is all about, here is a photo of perhaps the stupidest (and my favorite) sculpture of all time, "Spoonbridge and Cherry" which resides in the sculpture garden outside of the Walker Art Center: 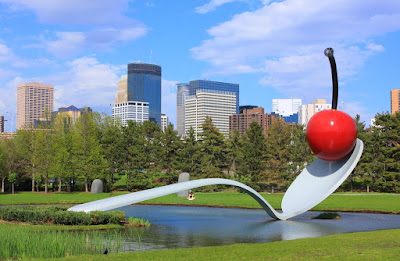