While I know that doctors used to give trays of mercury out to fidgety children in waiting rooms to placate them (I think there was an abacus in my optometrist's office when I was small: post-mercury, pre-Xbox on the kids' toy timeline), nevertheless I am none too jazzed to have inhaled all the gas from a broken compact fluorescent lightbulb yesterday, as in my lifetime, kids have always known to keep their hands out of the mercury jar. Our parents might reminisce (with horror) about it, but for the most part we all now refrain from posing atop pools of it for group photos and the like. (I recognize this takes an enormous amount of restraint, since many of us can't stop eating three bacon cheeseburgers a day or sticking our fingers into wild animal cages ... or maybe it just went out of fashion, like fitting a lot of people into a phone booth.) 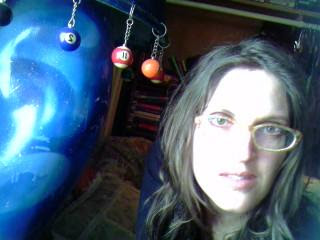 me with the precarious mannequin lamp,
before our relationship became strained

I seem to be ok, but I'm wondering how I could have missed the new don't-break-lightbulbs memo; aren't lightbulbs traditionally pretty easy things to break? Everyone knew not to go chucking thermometers around the house. Why didn't I know the light bulb thing? I didn't realize they had anything to do with mercury. I thought I was doing a Good Deed, one of those Ten Simple Things you can do to save the environment or whatever (anyone remember the other nine? I can only keep one thing under control at a time, so I was just doing that one to the hilt) and was primed to reap my cosmic reward. But instead I get mercury poisoning. Not cool. Where have I gone astray?

Also, did you know that it costs about a million times more to recycle plastic bags than to just make more of them? (And at some supermarkets the baggers seem bent on giving you as many plastic bags as possible, quickly, and if you do manage to head them off by asking for paper, they'll put the paper bags inside plastic ones; so the only reasonable thing you can do if you've forgotten your own bags is to juggle your produce out the door.)

But wait - while we're on the topic of things that seem good not really being so good, this one is even weirder. I was reading the fine print in the crew deal memo for one of my recent jobs, and I discovered this stipulation:


UNIQUE SERVICES
Employee hereby acknowledges that the services Employee are to perform hereunder are of a unique, unusual, extraordinary and intellectual character involving high skill and giving them peculiar value, the loss of which cannot be reasonably or adequately compensated by damages in an action at law, and that a breach of this Agreement by Employee shall cause Producer irreparable injury and damage.

Does that say what I think it says? I'm a little hurt by my services being referred to as "peculiar," but I'll let that slide since there seems to be a much bigger issue at stake here: not only can I be sued for not following through with my job responsibilities (or by, obviously, leaking sensitive information to the press, which is an absurd and selfish thing no one in their right mind under these circumstances would do - unless offered a very large sum of money), but if I was in fact sued and then cleaned out in such a lawsuit, that wouldn't be good enough. I could be harassed for life.

So the moral to today's blog could be any of these things: