Got into New Orleans yesterday.

It's crazy here .. today we had a location scout, and so we've driven all over the place: it's like Hurricane Aftermath 101. There are areas that were heavily storm damaged where houses were never repaired, or were gutted (wooden beams still standing, walls torn out) and never rebuilt. Some have partially collapsed roofs, or look like they've been burned, or wooden slats seem to be falling off the side of the house. Whole shopping centers, schools, churches remain empty or boarded up but somewhat structurally intact (minus the windows), atop piles of rubble. Trees that snapped in half still sit there looking trampled. Boats lie around in the most random places, where they drifted and were abandoned. Three years later!! 300,000 people left the city, driftwood where houses used to be, and never returned. There are cryptic spray painted notations on the houses, meant to help evaluate the damage quickly when driving by (but still there!), so you'll drive through a trashed neighborhood - weird in the first place, because even in the slums here a lot of people have whole houses, and even where things are in good shape, it looks like everything is about to fall over and peel off. There's a thin line between what's inhabited and what isn't. People sit out on their front steps in these neighborhoods. So you'll drive through an area like this, where there was a total storm evacuation, and there will be these X's in spraypaint, with things written in the spaces between the lines (like the old NY hardcore symbol - remember that?) and the one on top is the date someone went in to assess (after the flood waters went down: September, October; but no year. evidently it didn't occur to anyone that no more would be done afterward) and the one on the left I couldn't figure out, maybe the crew that went in, and the number on the bottom is dead bodies found. On one I saw "O D, O A." Zeroes with lines through them (zero dead; zero alive?). And the right side is* - best guess - who or what was found alive (usually nothing, since everyone would have to have evacuated long before .. but sometimes dogs or cats). Some have a big red X sign affixed in a window: maybe slated for demolition. A few say "no demo" but don't appear as if the owner with such good intentions ever returned. *(note: see rebecca's 2nd comment for further info. on all this) Some houses are built on stilts, a whole storey off the ground. You drive around looking at the houses that start at ground level, then the ones that start one story up, and think of both: what were they thinking?? That's not high enough! The whole city isn't high enough. Flying over it, everything looks like a flood. It's impossible to look at the city as a whole as something other than a disaster waiting to happen, and a disaster that already happened. It's absurd. Unreal. The way to forget, as with all the hideousness in life, as with global climate change and American capitalist world domination and the erosion of our civil rights, and remembrance of the Holocaust, and the knowledge that further atrocities are occurring and will occur, and the recognition that profit drives many people more than does respect for individual life (or the future of life at all .... ) is to inspect the minutia. Under a microscope, everything is beautiful.

(Well, not everything .. maybe not your lover's scalp, or the grime between the faucet handle and the porcelain around your bathroom sink, but my point is - look at everything, really every little thing. It's all you've got, when the big picture sucks. It's the little things; they go on. Little snapshots.)

We drove over the Lake Pontchartrain Causeway. Almost 24 miles! (Should've thrown my camera in the lake. The batteries pissed out on me five minutes into the location scout! But I'll be back to most of these places.) Saw alligator heads for sale near the airboat swamp tours in Lafitte.

Haven't gone anywhere for fun except Bourbon St, where tourists on second story balconies were throwing Mardi Gras beads down at people on the street. (What do those shoes mean, anyway??) The hotel looks haunted. All the hotels look haunted!! Even in the day, little daylight gets in. But they are full of dim artificial lighting (mostly chandeliers) and have weird room divisions, too much furniture, and mirrors everywhere. The lobbies border the streets but feel like they're a mile underground. Still, better than the job I left behind: touching up black light paint for a ride at Universal, in endless identical rooms. And the underbelly of the building, en route to the supply office, was like a mine shaft, or an episode of Fraggle Rock where everyone was wearing hard hats.

Check out these table legs in the hotel lobby! This is me reflected in the spooky elevator doors. Everywhere there is the feeling that there is something there which isn't actually there. Rearranged the furniture in my hotel room(s = a suite!), covered up the televisions. Turned up the thermostat three degrees.

And here we go.

APPENDIX:
here's the photo of Matthew I refer to in the comments. 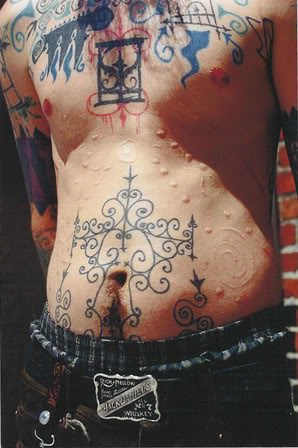